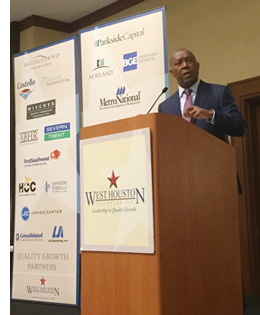 “We want those people who come to the Super Bowl next February to think that Houston is not just a nice place to visit but a wonderful place to raise their families and open their businesses,” said Mayor Sylvester Turner to a crowd of approximately 220 at WHA’s City Issues Forum.

The developers, engineers, lawyers, consultants, and elected officials that made up the vast majority of the audience were receptive to the Mayor’s message of seeking to share and sacrifice to build on the vision and opportunities that made Houston a great city. The Mayor recognized City of Houston Council Members Jack Christie, Amanda Edwards, David Robinson, and Robert Gallegos, as well as State Representative Armando Walle, Katy Mayor Fabol Hughes, Hedwig Village Mayor Brian Muecke, and many other elected officials.

“I want to work with mayors and officials in our area. We have a lot of work to do. Over the next year, Houston is hosting the Super Bowl, Final Four, the Shell Open, and many other events. A hotel chain recently decided that it would build its next major hotel here in Houston instead of Dallas. Because we are a destination and people see opportunity in Houston and the surrounding area,” said the Mayor. “Based on projections, we are going to put the equivalent population of the City of Chicago in the Houston area over the next fifteen years. This means that we are going to need to figure out better ways to get people around Houston than just driving alone in a car.”

The Mayor stated that within a year, he would work with firefighters, police officers, and City employees to fix the pension while keeping Houstonians safe and secure. But he added that he will need help from the business community on the revenue cap. He remarked that Fitch, S&P, and Moody’s all listed the revenue cap as one of the primary reasons for their recent downgrades of Houston’s credit ratings. The Mayor explained that lifting the revenue cap is critical for Houston’s growth and warned that if Houstonians fail to lift the revenue cap they do so at their own peril. He compared Houston to a business that needs to invest in itself for growth unless it wants to see the business go elsewhere.

“This was an exciting event. It’s the biggest crowd that I’ve seen at a WHA forum. The Mayor really surprised and excited a lot of folks today,” said WHA Chairman John Moody after the Mayor’s speech.