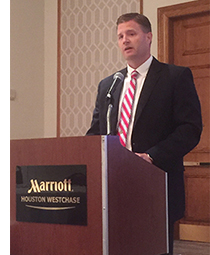 Steve Costello and Russ Poppe spoke to a crowd of over 100 people at our September 15th Flood Control Forum. Both Costello and Poppe provided informative and timely presentations (available at this link) and made major announcements.

Russ Poppe announced that the Harris County Flood Control District would seek funding for a Cypress Creek Reservoir in Northwest Harris County as part of a 216 Study underway by the U.S. Army Corps of Engineers. Poppe also explained that the Tax Day Floods were historic not just because of the amount of rain that fell but because of the precedent conditions. In other words, the soil was saturated prior to flooding, so runoff on soil was not significantly different than on impervious surface. In fact, newer development provided drainage protection downstream. 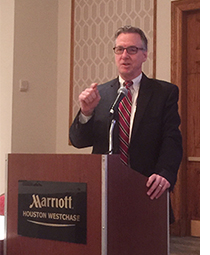 A major topic of discussion was funding for the District. While the District should see increases funding for operations in future years, these increases are likely inadequate to support the level of flood control protection that experts see as necessary, especially in established neighborhoods.