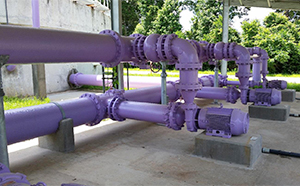 Conventional wisdom suggests that the cost of retrofitting a “purple-pipe” system to treat and distribute treated wastewater to amenity ponds and irrigation areas far exceeds the resulting benefits, especially with treated water available at $3.00 per 1,000 gallons for many cities and utilities. Two developments are changing these economics and are making reclaim ed water systems much more economically attractive.

First, the cost of water is going up. Our region is spending well over $3 billion to convert from groundwater supplies to surface water supplies to avoid continued subsidence. We are building a large pump station on the Trinity River, a 26 mile canal from the Trinity River to Lake Houston, an expansion of the Northeast Water Purification Plant, a 96″ diameter pipeline from Lake Houston to North Fort Bend County, and other large diameter pipelines. These projects are all designed to utilize the firm yield of Lake Livingston. We are borrowing most of the cost and we must repay our lenders using the revenue our water utilities receive by selling the water and passing on fees. Even using a very conservative cost escalation curve, it is not unreasonable to expect that the end user cost of water might reach $10 or $12 per 1,000 gallons by the year 2050.

Second, ultra-low interest loans are preferentially available for water reuse and conservation projects through the State Water Implementation Fund for Texas (SWIFT). This program uses a $2 billion securitization fund (created using a one-time transfer of money from the state’s “rainy day” fund) to drive interest rates down to 36% of normal municipal bond market rates. The competitive program favors reuse projects, so purple pipe systems have an advantage when seeking this type of financing.

We recently completed a reclaimed water feasibility study for a district with a population of about 5,300 which is expected to grow to a population of about 18,200 by 2060. The study found that if the district implemented a reclaimed water program serving about 30 sites (amenity ponds and large irrigation areas) for $10.8 million it would save 1.8 billion gallons of water from 2015 to 2044. The avoided water purchase costs were estimated to be about $14.8 million over that same time horizon. Total expenditures, with interest payments included, were estimated to be $12.1 million; yielding a savings of $2.7 million, without consideration of “alternative water” incentives offered by the regional water authority.

The proposed reclaimed water system would initially provide 12.4 million gallons per year in 2017 and would increase to 108.7 million gallons per year by 2044. The system would provide Type I reclaimed water, suitable for application on areas with human contact. Capital program costs were estimated to be $10.8 million (mostly for distribution lines). Interest payments were estimated to be $1.3 million.

When the future cost of water and the availability of ultra-low interest loans that target reuse projects are considered in the economic evaluation, purple pipe systems frequently make a lot of sense. For more information on this please contact Michael Bloom at 281-921-8784 or at mbloom@rgmiller.com.