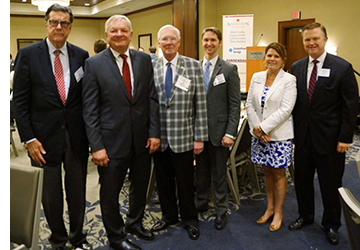 Commissioner Steve Radack needed little introduction in what has turned into an annual tradition: the commissioner speaking at WHA’s County Issues Forum Luncheon, serving up a lot candid ideas with plenty of humor.

Commissioner Radack started by saying, “After years in law enforcement, it feels like I came into this job and traded in my gun for a shovel. I don’t know which is harder to use.”

He stressed the need for cooperation between government entities, and gave some examples of recent successes, like the joint processing center. The Commissioner also noted that it was hard to get voters interested in the most important issues, but the audience could help. 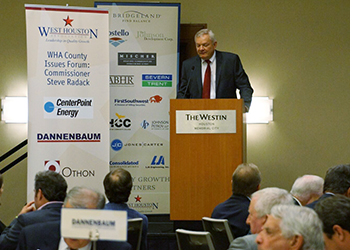 “I understand that a lot of people want to talk about bathrooms, but frankly we have already talked about that, and we have bigger and more pressing issues right now. We just had the third 500 year flood since I’ve been Commissioner,” he said.

“People want better infrastructure so their houses don’t flood. But a lot of people don’t want to pay for it,” said the Commissioner. He asked the audience to get their friends and family to support funding for local infrastructure, especially drainage and transportation infrastructure.

Harris County sends a lot more money to the State than it gets back. We need more of that money here, and we need TxDOT to move faster. But at least TxDOT is trying to work with us.

“If the federal government can find $6 billion to fix drainage in a much smaller town, like New Orleans, they should be able to find $2 or $3 billion to help Houston. We could use federal help, but it’s important that the decisions on how the funds are spent are made locally.”

The Commissioner poked fun at several local officials during his speech, but stressed that they were all friends. An audience member asked Commissioner Radack how he treated his enemies. Smiling, the Commissioner said, “You don’t want to know.”